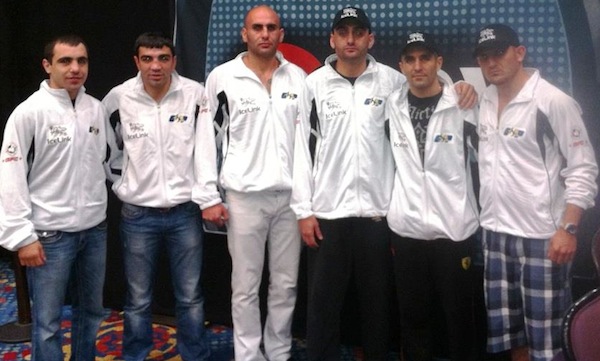 HyeFighter Art “Lionheart” Hovhannisyan weighed in at an even 132 pounds for his main event fight against Miguel Acosta (who weighed in at 134 pounds) on Friday July 20th from Santa Ynez California and televised live on Showtime.  Fellow HyeFighters Azat Hovhanissyan and Gabriel Tolmajyan, along with Trainer/coach Edmond Tarverdyan and manager George Bastrmajyan of Lights Out Promotions have done their part in getting Art ready for this battle.  And, Art will take over Friday night and do what he does best.

Thanks to Urartu Productions for their support and coverage of this event.

Art has trained extremely hard for this fight and considers this to be the biggest challenge of his professional boxing career.

At 30, HyeFighter Art Hovhannisyan (14-0-2, 8 KOs) is a six-year pro who is highly regarded as a very hard puncher. This Friday, July 20, in what should be an exciting main event on Showtime, the Glendale, Calif.-based HyeFighter faces always-dangerous, hard-hitting former World Boxing Association (WBA) lightweight champion Miguel Acosta (29-5-2, 23 KOs) at Chumash Casino Resort in Santa Ynez, Calif. 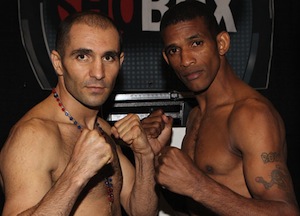 Hovhannisyan will be making his first start in 11 months and second in a row against a former world titleholder. In his last outing, he fought a technical draw with ex-International Boxing Federation (IBF) featherweight champion Cristobal Cruz in an entertaining bout on Aug. 5, 2011, that was stopped at 2:36 of the fourth round due to a nasty, accidental head butt that opened a bad cut on Cruz’ forehead.

The experienced, aggressive-minded Acosta captured the WBA lightweight crown in May 2010 but lost it in his first defense to Brandon Rios in a thrilling, fast-paced scrap with plenty of two-way action on Feb. 26, 2011. Acosta swept the first four rounds on two of the scorecards and hurt Rios on several occasions, but Rios rallied to win by 10th-round TKO.

Hovhannisyan, who scored a career-best victory with a sixth-round knockout over previously undefeated prospect Archie Ray Marquez on June 10, 2011, on ShoBox, knows this could be his toughest fight. But he desperately wants to jump-start his career, so what better time than now?

“This is the kind of fight I have to take and I have to win,’’ he said. “As soon as we got the call, I took the fight. It took me about a second to decide. I know some may think twice about me fighting two former champs back-to-back, but I’m thrilled for the opportunity. I’m definitely ready to take the next step,

“I’m really eager to show my critics that I’m not a one-hit wonder, that the Marquez fight was for real. I’m determined to show the people that I have the goods to be a world champ. It’s going to be a great fight.

“I’m a hard worker and will be as motivated as I can be. I’m definitely treating this like a world title fight. I have all the respect for Acosta and know he’s a great champion. I would have liked to take a fight at 130 pounds, but at some point I have to fight and defeat some good fighters.”

Tickets for an event presented by Gary Shaw Productions in association with Thompson Boxing Promotions are priced at $35, $45, $55, $70, and $85 and are on sale at Chumash Resort Casino Box office or online at www.startickets.com.

What are your thoughts on Acosta?
“I’ve watched four or five of Acosta’s fights, and I definitely saw his fight against Rios. I thought he was impressive until he ran out of gas. I know I won’t be able to relax against him.’’

Why so few fights throughout your career?
“I haven’t fought the last year mostly because I’ve had fights fall through. I’ve had a few offers; Rances Barthelemy, for one, but he didn’t take it. I had three training camps stopped abruptly. If I had my way, I’d have been fighting a lot more. But it takes two.

“Injuries played a large part, too. I’ve broken my right hand right twice. I’ll never be 100 percent. My doctor says I hit too hard for the weight class, and my bones are too fragile for all my power, something like that. I’ve also suffered a back injury and hurt my other hand. I guess I’ve had a series of bad fortune. When healthy, I’m OK but it’s hard to stay healthy because my right hand is so suspect. I fight through it all, that’s what I do. I’m a grown man with grown-man power. I know what I want to do in boxing and what I have to deal with. String a few victories together and I know I’ll be on the threshold of some big fights.’’

How did you feel you were performing against Cristobal Cruz before a clash of heads ended it?
“I like to pace myself and kind of see what I need to do. It was obvious I was eventually going to stop him. I didn’t think the cut was that bad and I wanted the fight to continue because I’d already taken his best shots and I knew I’d finish him in the next two or three rounds. I’d fight Cruz again any time.”

What was it like sparring with ex-world champions Manny Pacquiao and Amir Khan?
“It was an incredible experience. I loved every second of it. If they wanted more rounds, I gave them more. To work with great fighters like that was invaluable to me and I cherished every second.’’

What fighters inspire you?
“I really look up to Mike Tyson and his aggressive style. He was short but he came in to take your head off. There are no friends in the ring. If you wanted to shake hands, he would after he knocked you out.’’

Are you excited about fighting a third time in a row at Chumash?
“I love Chumash and I love fighting there. The atmosphere, the ring, I’m real comfortable with all of that. Chumash is becoming like a home for me.’’