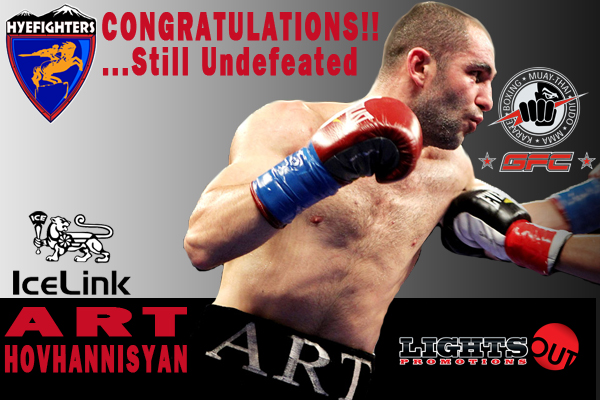 The first round started out slow for both of the fighters as they maneuvered to feel each other out.  However, with about 8 seconds left in the first, Art landed a devastating right to Acosta’s head that dropped Acosta and the end bell of round 1 was the only thing that save Acosta.  However, in the fifth, Acosta scored a flash knockdown, when Art took a punch that got him off balance and he put his hand down on the canvas.  The fight was very exciting and Art was definitely throwing the bigger and harder punches of the two.  The fight was close, and the judges had it scored 95-93, 95-93 for Hovhannisyan, 96-92 Acosta.

Hovhannisyan had described this as the biggest test of his professional career, and he passed.  We all hope this will be the fight that propels his career and gets him opportunities to fight for championships.  As always, fellow HyeFighters were at Hovhannisyan’s side (fellow boxers, Gabriel Tplmadjyan and Azat Hovhanissyan) as well as Strikeforce women’s MMA Champion Ronda Rousey.  Edmond Tarverdyan and George Bastrmajyan were cornering and coaching Art once again.

Facing his toughest opponent to date in his professional career, Art Hovhannisyan faced further adversity when he was knocked down halfway through his scheduled 10 round bout. Hovhannisyan shook off the knockdown, finished strong in the final rounds to win a close 10 round split decision victory over former world title holder Miguel Acosta at the Chumash Casino Resort in Santa Ynez, CA.

At the end of the first round, Hovhannisyan scored a knockdown with a lead, overhand right hand to the head of Acosta. Hovhannisyan was not able to follow up as the bell sounded to end the round.

Hovhannisyan was in control of the fight until Acosta dropped him with a counter right hand to the head. Hovhannisyan’s knee hit the canvas and referee Marcos Rosales correctly called it a knockdown.

As the bout progressed, Acosta began timing Hovhannisyan with right hands to the head. Acosta began to let his hands go, also throwing and landing with an occasional left hook.

However, Acosta began to slow down in the ninth round, allowing Hovhannisyan to press the action. Both fighters had their moments in a action-filled 10th round, trading combinations to the head and body.

“I wanted to end the fight with one punch,” said Hovhannisyan, who had over 200 amateur fights in his career. “I was not hurt by the knockdown. It was a flash knockdown. Every round i was getting stronger and stronger. I could have worked better, but i know i won the fight and i gave the fans a good performance.”

Acosta had an obviously different opinion of the fight.

I’m very sure I won this fight,” said Acosta, who had not fought since a 12 round unanimous decision loss to Richard Abril. “Although he caught me in the first round, I landed more punches throughout the fight. After he knocked me down, i got my confidence back little by little with each round. I knew my conditioning was good and it would carry me into the fight. I wished i only had more rounds to work with.”