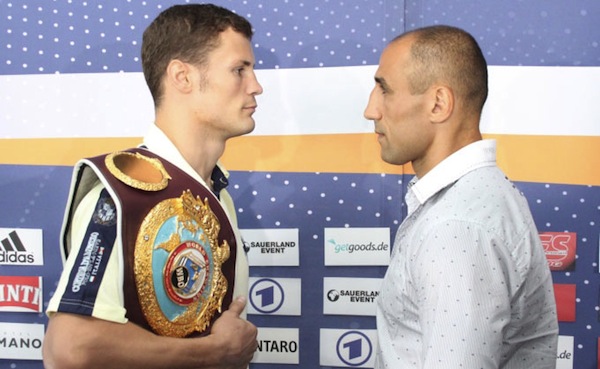 Tension is in the air ahead of the big super-middleweight world championship fight between Robert Stieglitz (42-2, 23 KOs) and Arthur Abraham (34-3, 27 KOs) this Saturday at the o2 World Berlin, Germany. At today’s press conference both fighters were in good spirits. Current WBO Champion Robert Stieglitz was seemingly calm and said: “I feel great and I am going to defend my title. My preparations have been going extremely well.” HyeFighter Arthur Abraham was quite relaxed himself. “We don’t talk a lot beforehand. Actions speak louder than words and I am going to answer all questions inside the ring.”

Wilfried and Kalle Sauerland as well as Ulf Steinforth were not as quiet as the two boxers. The promoters openly talked about the good working relationship between both parties. “We are hoping to host more all German fights on home soil,” said Wilfried Sauerland. Ulf Steinforth added: “Boxing in Germany needs these kind of fights.” Also looking forward to Saturday night is promoter Kalle Sauerland who got straight to the point. “It is going to be a real war inside the ring come Saturday 10:45 pm.”

The theme for the big fight “The last chance” was not chosen randomly. It really is an all or nothing situation the former IBF Middleweight Champion finds himself in. “From this point onwards, every fight is going to be a last chance for me. But I will grab it with both hands. No matter if the fight goes the distance or not – I will prove a point on Saturday.”

Unsurprisingly, the SES Camp has a completely different opinion. Stieglitz’s coach Dirk Dzemski: “We ware going to keep the belt. We detected a lot of weaknesses while watching Abraham and we will take full advantage of them.”

Ulf Steinforth added: “Both sides still have some tricks up their sleeves, the difference is that we have a lot more of them.” According to Abraham’s coach Ulli Wegner tricks are not necessary. “Who needs tricks? We are going to wipe the floor with them and that’s the end of the story.”