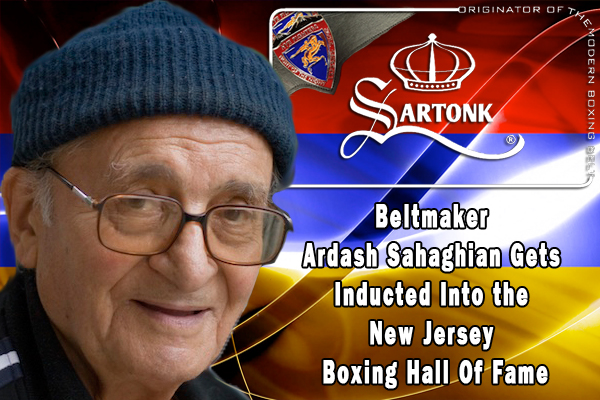 Sahaghian began his career as craftsman of boxing belts in the 1970s. A jeweler by trade and artist by birth, he was invited by Philip Valentino to apply his range of skills to the redesigning of championship boxing belts. At the time, Valentino was beginning to manufacture the existing 2D models of the belts.

The fruits of Sahaghian’s labor are what we have come to recognize as today’s modern — 3D — boxing belts. Whether it be modifications to Ring Magazine belts, designing of title belts, or reproductions such as the John L. Sullivan belt, Sahaghian has contributed to over 30 years of boxing history.

Perhaps most recognizable of Sahaghian’s work – due to national TV – are the current WBA, WBO, IBF, and IBO title belts. Yet, his complete portfolio of work includes virtually all of the boxing models used today as well as various MMA title belts and specialty pieces.

Reflecting on his prolific career and the news of the induction, Sahaghian remarks, “I love to work with my hands. I’ve been working with my hands since I was 14. I have to work. And I’m very grateful for this honor.”

In 2008, Sahaghian’s grandson, Edward S. Majian founded Sartonk Designs to preserve his grandfather’s legacy and the history of championship boxing belts. Having learned from his grandfather, Majian intended to carry forth his family’s tradition of excellent craftsmanship. “I’ve been blessed with many opportunities, many of them due to the sacrifices and support of my grandparents. Founding SARTONK was one such opportunity, as well as a responsibility to give back,” expresses Majian. On the occasion of his grandfather’s induction, he proclaims, “This is undoubtedly one of the proudest moments of my life. My family and I are humbled by the outpouring of excitement and support we’ve received from the local boxing community.”

One notable supporter is internationally recognized boxing referee and International Boxing Hall of Fame Inductee, Joe Cortez. “I’m happy he’s finally inducted. He’s one of the individuals who should have been inducted years ago. He’s a master, creator and legend. Without him, we wouldn’t have these belts. In my heart, he’s a people’s champion, a champion of the champions,” reflects Cortez.Another supporter, Officer Joe Botti, has been involved in the sport of boxing for over 30 years as a boxer, trainer, manager, and gym operator. He has this to say: “I was thrilled when I discovered that Ardash Sahaghian lived and created his boxing belt designs in the same town in which I operate a boxing gym. He is a true boxing legend and a master at his craft. When I think of all the boxing legends I have met in my lifetime, I place meeting Ardash, the creator of the modern boxing belt, as one of my most memorable. I am honored to have him as a friend. Congratulations to a true boxing legend!”

Now 90 years old, Sahaghian oversees the design of SARTONK’s new belts and the production of those he created three decades ago.