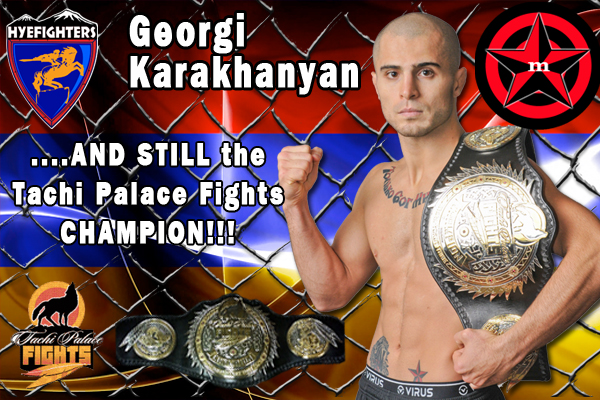 In a hard fought 5 round title defense, Georgi Karakhanyan was able to successfully defend his title against WEC and The Ultimate Fighter veteran Micah Miller. The fight was never in doubt but Miller made it difficult by refusing to engage and was content on pushing Karakhanyan against the fence, doing what, I do not know.  Georgi, however, had a definate game plan and from the start, it was obvious that he planned to take out Miller’s lead leg and worked on it constantly in the first 2 rounds, which enabled Karakhanyan to take down Miller at will in the latter rounds.

Here is a breakdown of how each round went:

ROUND 1
Karakhanyan, right off the glove touch, throws a leg kick and soon is put up against the cage by Miller but easily breaks away throwing a right hook and a hard right leg. Miller being cautious with his stance, protecting his head more, but Karakhanyan mixes up his stance making him hard to be predictable and throws leg kicks and punches at Miller. Karakhanyan ends the round breaking away from the clinch and throwing a leg kick.

ROUND 3
Miller throws a front kick and pushes Karakhanyan against the cage but Karakhanyan breaks away from the cage and turns Miller up on the cage. At 2:10 mark in the round Miller tries to pull Karakhanyan to the ground but pulls up and gets pushed up against the cage. With 37 seconds left in the fight Karakhanyan gets a well executed choke. The choke is tight but unfortunately he loses the opportunity for a tap due to the time running out.

ROUND 4
Both fighters get in the clinch again and Karakhanyan is pushed up against the cage but soon throws a hook that misses. At 3:17 of the round Karakhanyan takes down Miller but Miller is able to get up. Miller attempts to take the back of Karakhanyan but ends up taking himself down with Karakhanyan on top of him. Karakhanyan with no doubt wins the round with take downs.

ROUND 5
Both fighters begin the round in the clinch but Karakhanyan breaks and Miller throws a flying knee Karahanyan ducks and Miller flips over with Karakhanyan jumping on top of him. At 3:28 of the round Karakhanyan takes down Miller and ends on top holding him down. Karakhanyan slowly ground and pounds Miller controlling him on the ground transitioning to different positions to get a submission attempt. Karakhanyan ends the round throwing a flurry of punches.

Georgi Karakhanyan wins the fight by a unanimous decisions.