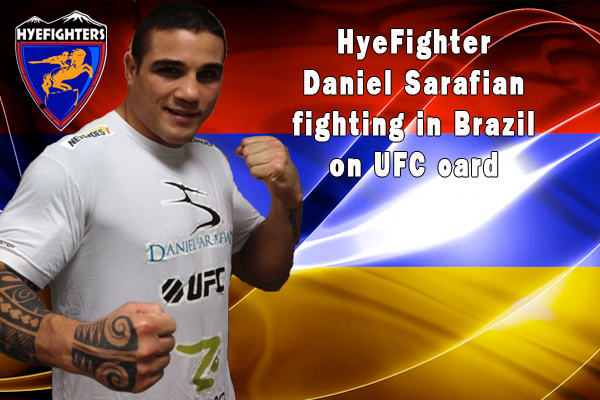 Daniel Sarafian and Cezar Mutante are the stars of the co-main event, UFC Fight Night 32, which will be held on November 9 in Goiânia, Brazil.

Check out our exclusive interview with the fighter Daniel Sarafian:

Daniel, your opponent Cezar Mutante has a black belt in Jiu Jitsu. He is also taller and has more reach than you have. How do you want to block his strategy?

I’m very used to fight against fighters with more reach than me. He is bigger than me. But I will train a lot and will arrive in this fight ready for everything, I am very committed in what I do. However, I’m scared too, I do not think I’m “the guy”. This fear is good and help me focus to get there and perform my strategy well, keeping my tactics and leave with a good win. I will give my best until my limit.

What is your opinion of his game?

I think Cezar is predictable, but sometimes makes unpredictable things. That’s what makes him dangerous. Sometimes you relax in his game, but you must be focused and aware the whole time with him. You can´t relax. He is a great athlete, will teach me a lot in this fight but I will do my best to prove myself.

Daniel, tell us a little bit about your camp

We made a part of the camp in Demian´s Maia academy . The grappling training is wonderful with a lot of good coaches. My camp started in the middle of Demian´s camp.This was wonderful because the human material and focus increase in his academy . This is a very positive point for me. Another good point for the training is that there were great big left-handed fighters, unlike the first time when I was there . A cousin of my coach Pitu , called Junior , is an excellent boxer and kicks very well. Besides this he has 1.85 m similar to Mutante that has 1.88 m. I have also done some sparring with Luiz Banha Cane a very skilled left-handed fighter who will soon return to the UFC. He is having very positive reviews from his last fights.  We also brought Antonio Mendes Samurai, who had already fought in the UFC. He is very good at striking and kicks. I am well served with the people that I am training with. Adrian Jaoude trains wrestling with me and the champion of Kyokushin Karate Enrico Magellan who is a student of Ademir da Costa has been helping too. I’ll be prepared for this fight.

Mutante said in a recent interview that he didn´t want to study your strategy, preferring to hone and focus only on his. What do you think about this ?

I also think I have to improve my strategy. Each athlete has its own vision. I always studied my opponents and I will not change now because I am doing well. I prefer that he doesn´t study me and if this is not just a bluff from him, I think it’s great!
Is this a TUF finale or just another fight for you?

For me this is just one more fight. There is no more TUF finale. He was the champion and with his own merits. My problem is that I got hurt and had to be replaced. It´s better now because I have the opportunity to win against champion of TUF. To fight more and more with tougher guys that are known and have great potential is what I want for me, since my first day of fighting. I am very excited about this opportunity. When you go to war, it is to kill or be killed. I will give my life in this fight!

How do you see your career so far in the UFC?

I only look forward. I had a great victory and a loss with a good performance and I know that I could have been better than that, in my tactical game. There was a lot of pressure on me. What went wrong in the fight against Dollaway was the timing of it. I was one year without fighting. Because of the injury, I was 11 months and one week without fighting. It is too long. I went there but messed up.

I fought beyond my limit and a lot of people applauded me saying that I should have won that fight. I have a clear conscience that I did my best there. If I keep doing my best the UFC fans will be satisfied with my work!
You have a strong charisma with your fans. What you expect in Goiania?

I want to do the best that I can. I hope people like it.

A message for the Armenians of Glendale, Los Angeles, I want to go there to train with Gokor Chivichyan, Araz and all the hye fighters team. Wait my visit soon.