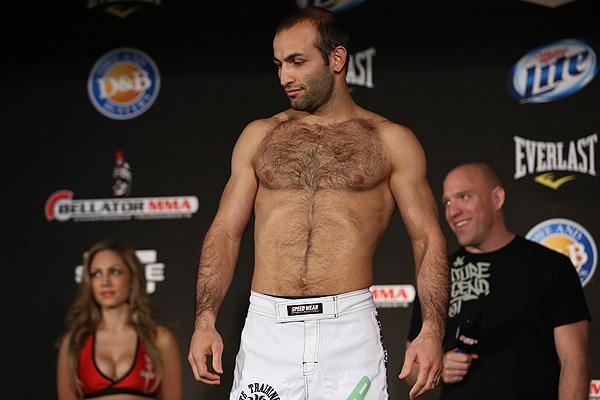 HyeFighter Akop “Sniper” Stepanyan, a lightning-fast featherweight from Yerevan, represented Team Russia in a quality fashion at the League S-70 MMA event in Sochi, Russia.  The large audience, including Russian president Vladimir Putin, saw Stepanyan put on a stand-up clinic, as he cruised to a UD win over a UFC veteran and onetime TUF finalist Andre Winner.

Round 1 began with both fighters testing each other’s reflexes.  Early on Akop displayed fast-paced-activity, with his quick punching combos.  His speed forced Andre Winner to adopt a decidedly defensive strategy, covering up head in a boxing stance.  About a minute in, Stepanyan was able to get through his opponen’t defense with a nice round house kick to the mid-torso section, followed by a swift 1-2 combo.  Essentially, he got Winner’s number at that point.  Andre obviously decided to seek his fortunes in counter-attacks, ceding initiative to Stepanyan and failing to utilize his formidable height and reach advantage.  Akop continued to use low kicks and rapid jabs, often foraying to the inside, while displaying excellent ring generalship and feel for distance, promptly disengaging when Winner tried to counter.  Winner often found himself against the ropes, sustaining a barrage of punches and kicks, with Stepanyan getting creative at changing levels of attack and trying daring moves (among them, a spinning backfist).  At the end of the round, Akop was able to connect with a spinning heel kick, and then a formidable left hook.  The round ended with Akop nearly achieving a judo hip throw out of clinch.

Round 2 did not begin too well for Winner, as Akop’s spinning low kick aimed at the liver ended up knocking into the solar plexus/cup area.  After Winner got a minute to recuperate, the fighters proceeded to exchange spinning and low kick attempts.  Stepanyan avoided damage by swiftly moving out of the line of attack.  The second half of the round saw him teetering on the edge of achieving a knockout, as his attacks became faster and more creative.  At one point, he briefly dropped Winner with a nice knee to abdomen.  Winner was forced to cover up and absorb against the ropes.  Akop’s low kicks decreased Winner’s mobility, while his jabs and punches often found mark.

Round 3 begun with Akop getting through with a hook to head.  He was able to maintain a faster-than-fast pace and kept Winner firmly in retreat.  At half-round mark, he really put the pressure on, culminating with hitting the mark with an excellent spinning high kick at 1:17, and following that with a spinning low kick and a 1-2 combo.   A slight clock malfunction prolonged the final round and allowed Stepanyan to get another spinning high-kick in.  The fight ended and the ref deservingly raised Akop’s hand.

The fight was firmly controlled by Stepanyan.  Him being a former practitioner of kickboxing and taekwondo, while Winner-a former boxer boxer and kyokushin karateka contrubuted to  the fight having a decidedly stand-up overtone.  If didn’t know better, a viewer might be forgiven for thinking it was a kickboxing bout.  Throughout, Akop displayed crisp technique and insane speed.  A casual fan may bemoan Akop’s aversion to risk-taking in the fight (which, in truth, probably prevented him from achieving an early victory), yet his self-control proved effective and impressive, especially when combined with technical prowess, giving him his 20th career win (and 7th in a row).  hyefighters.com  congratulates Akop Stepanyan and wishes him continuing success.